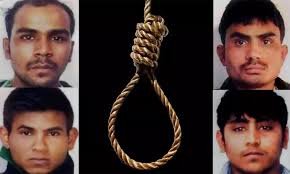 The Delhi High Court today refused to set aside the death warrant against the four Nirbhaya case convicts after the state government said their execution “will surely not take place” on January 22 because of a mercy plea filed by one of them. The court said the convict was free to approach the trial court, which issued the death warrant, and inform him about mercy petition. Vinay Sharma, Mukesh Kumar, Akshay Kumar Singh and Pawan Gupta are to be hanged next Wednesday at 7 am in Tihar jail, the trial court judge had declared, signing a death warrant seven years after a young medical student was gang-raped on a moving bus, tortured and killed in December 2012. “There is nothing wrong with the trial court’s order,” the High Court said.

Mukesh Singh filed a mercy petition yesterday. Even after it is rejected, a convict has to be given 14 days’ notice before execution. Under the rules, said Tihar jail, it would have to wait for the mercy plea to be decided by the President before executing the death warrant. Lawyer Rahul Mehra, representing the Delhi government, said: “The fate of a death convict comes to finality only after his mercy plea is rejected by the President.” None of the four convicts can be executed on January 22 unless the mercy plea is decided, the court was told.

Mr Mehra told the court that the pattern followed by the convicts to file their mercy pleas separately was a strategy to “frustrate the process of law”. The Supreme Court had on Tuesday dismissed the curative pleas of Mukesh and Vinay, closing their last legal option. Nirbhaya’s mother requested President Ram Nath Kovind to summarily reject the mercy petition of Mukesh Singh. “They will be hanged on the decided date, no matter which court they approach,” she told reporters.