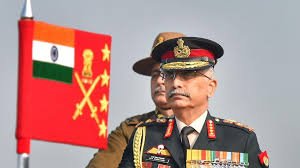 In a strong message to Pakistan, Army chief General MM Naravane today said that scrapping of Article 370 – that granted special status to Jammu and Kashmir – has “disrupted proxy war by western neighbor”. The centre had revoked J&K’s special status last year in August. “Scraping of Article 370 – a historic step – has adversely affected the plans of western neighbour and its proxies. It will help integrate Jammu and Kashmir with the mainstream,” General MM Naravane said in his address at a grand event in Delhi held to mark the 72nd Army Day.

The armed forces have “zero tolerance against terrorism”, he said, adding that it has “many options to counter those who promote terrorism”. “We will not hesitate to use them,” he was said.

The Army chief, who took over from General Bipin Rawat last month, has taken a tough line on Pakistan and the terror it sponsors. Last month, hours after assuming charge, he had issued a strongly-worded warning to Islamabad to desist from sponsoring terrorism. “We have evolved a strategy of resolute punitive response against sponsored terrorism. If Pakistan does not stop state-sponsored terrorism, we reserve right to pre-emptively strike at sources of terror,” General Naravane had told.  adding, “…multiple options across spectrum of conflict to respond to any act of terror sponsored or abetted by Pakistan”.

He had also said that he would ensure that his forces are kept “operationally ready” to meet any threat posed by terror camps that continue to exist across the Pakistan border. Earlier this month, he had said that scrapping of Article 370 has improved law and order situation in Jammu and Kashmir. “After abrogation of Article 370 in Jammu & Kashmir there are less incidents of violence. The figures and facts reflect that law and order situation has improved over there,” he said.